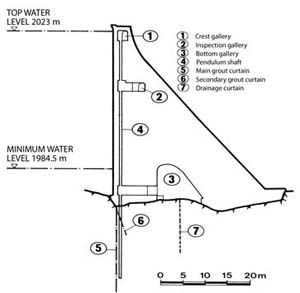 There are now three types of hydroelectric installations: storage, run-of-river, and pumped-storage facilities. Storage facilities use a dam to capture water in a reservoir, created by a dam. This stored water is released from the reservoir through turbines at the rate required to meet changing electricity needs or other needs such as flood control, fish passage, irrigation, navigation, and recreation.

What kind of technologies are available? There are different possibilities to classify them, the first one being to use the material used to construct the dam. Dams built of concrete, stone, or other masonry are called gravity dams, arch dams or buttress dams. Dams built of earth or rocks are called embankment dams.

Embankment dams are constructed of either earth fill or a combination of earth and rock fill. Therefore, embankment dams are generally built in areas where large amount of earth or rocks are available. They represent 75% of all dams in the world.

Gravity dams depend entirely on their own weight to resist the tremendous force of stored water. In the earlier times, some dams have been constructed with masonry blocks and concrete. Today, gravity dams are constructed by mass concrete or roller compacted concrete.

Arch dams are concrete dams that curve upstream toward the flow of water. They are generally built in narrow canyons, where the arch can transfer the water’s force to the canyon wall. Arch dams require much less concrete than gravity dams of the same length, but they require a solid rock foundation to support their weight.

Buttress dams depend for support on a series of vertical supports called buttresses, which run along the downstream face.